Here's what Sports Illustrated writer Mark Mulvoy had to say about the Scouts in his 1974-75 NHL preview. (He picked the Scouts to finish better than the California Golden Seals and Washington Capitals. The Scouts ended up only besting the Capitals.) 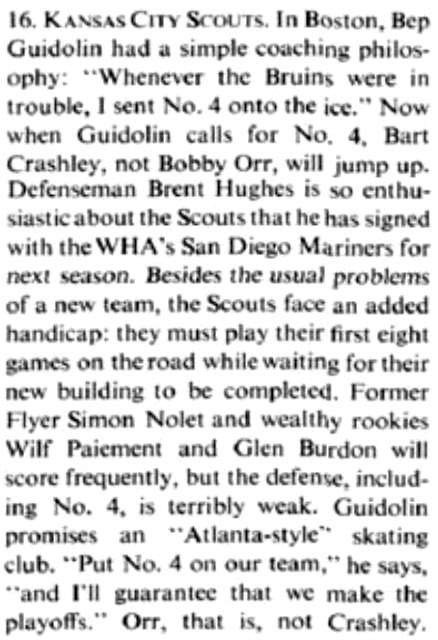 Posted by Aaron Stilley at 8:45 PM No comments:

The NHL will announce the cancellation of the remainder of the pre-season later today. No hockey thru October 8th.
— John Shannon (@JSportsnet) September 27, 2012


The NHL In Kansas City has obtained a copy of the announcement from the NHL:

"The NHL regretfully must cancel the remaining pre-season schedule due to the ongoing issue of our league managers and owners being tremendous assholes. We continue to be open to talks with the Players Association in hopes that they will cave to our incredible assholeness, but we remain committed to our insanely greedy demands that the players agree to roll back the money we already agreed to in existing contracts and tie their salaries to a lower fixed rate of our healthy revenue. We realize those demands are out of touch with reality and the fair market system most businesses are expected to work within, but, again, we are raging assholes.

To our fans in Kansas City, we appreciate your role as a leverage chip that helped the Penguins get a new arena as well as your surprising sell-out of last year's pre-season game, and we were looking forward to throwing you another bone with the Avalanche vs. Rangers match-up originally scheduled for October 6. Unfortunately, we are hot, steaming assholes."

Seven Second Video Of The Scouts Not Playing Hockey 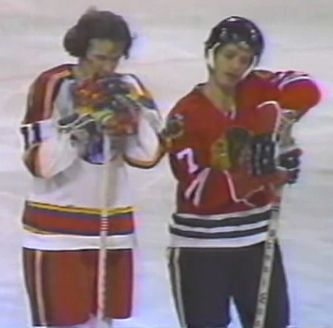 Footage of the Scouts is hard to come by. The only video I'd ever seen is from a video on YouTube showing some clips of the North Stars manhandling the Scouts (around 4:00-7:00). We can now add to that seven more seconds from this video (0:54-1:01). Wilf Paiement is shown fighting Grant Mulvey of the Black Hawks in Kemper Arena, and then we see Dave Hudson leaning on his stick, assumedly waiting to start playing again while the aftermath of the fight is cleared up. I'm pretty sure the footage comes from January 18, 1975, during a rare Scouts victory.
Posted by Aaron Stilley at 12:20 PM 3 comments: Good news today with the announcement that another NHL pre-season game will be played at the Sprint Center on Saturday, October 6, 2012 between the Colorado Avalanche and New York Rangers. It will be the fourth such game at Sprint, and the first to not include the Los Angeles Kings (who are owned by AEG, the same company that owns the Sprint Center). The game falling on a Saturday is ideal, and nabbing a marquee team in the Rangers is extra nice. The later date is also a bonus--October 6 should be deep into the preseason, so the rosters could be trimmed down close to what they will look like when the regular season begins. You never know who might actually make the trip with the Rangers, but between Marian Gaborik, Brad Richards, Ryan Callahan and Henrik Lundqvist, there is the potential for some star power. The Rangers coming is especially exciting for me since they have been "my" team ever since the early '90s when I learned the game watching the great Messier-Leetch-Richter teams.
Posted by Aaron Stilley at 11:31 AM No comments:

In the absence of any real news regarding the NHL in KC, here are five concepts for what an NHL team here might look like as part of a Puck Drawn contest:


You can vote for your favorite at Puck Drawn.
Posted by Aaron Stilley at 8:08 PM 5 comments:

• Just discovered another hockey in KC blog, The Lost City of Bettman. Here are their thoughts on the game:  Kings vs. Penguins in Perspective, Plus Pictures!!!

• Pitch: After awesome NHL exhibition game, fans shouldn't hold their breath for a team to move into Sprint Center
Posted by Aaron Stilley at 11:58 PM No comments:

• Greg Wyshynski captures my feelings about KC/AEG talking about only getting a team on their terms: "So, like, never then."

• Houses of the Hockey: Would NHL Hockey In Kansas City Work?